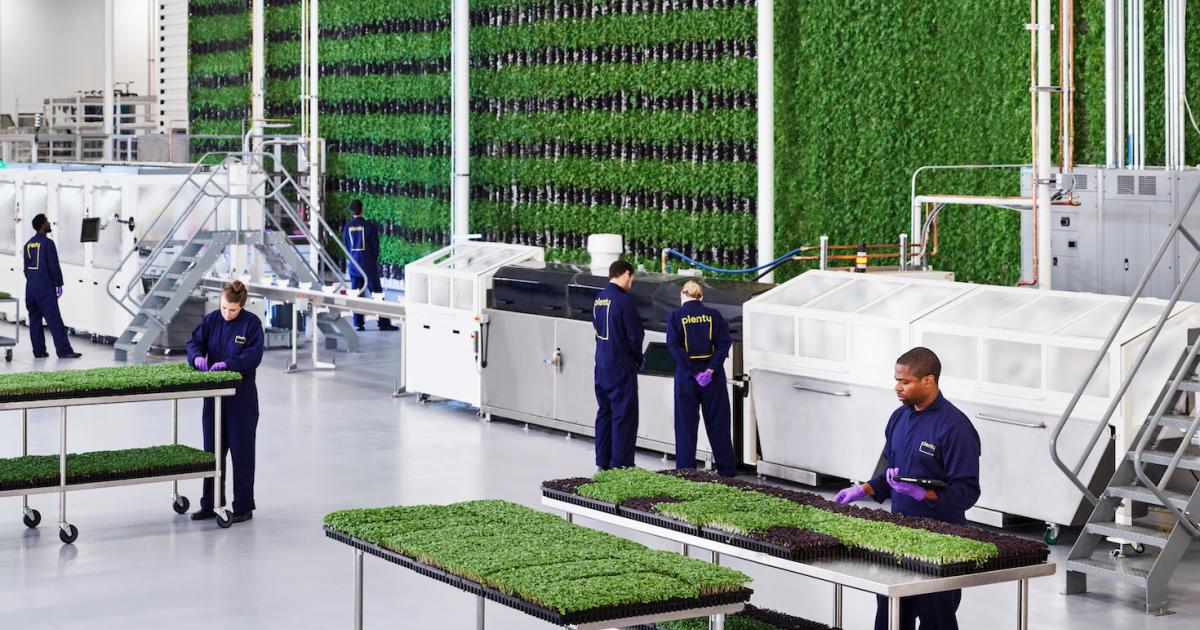 Indoor agriculture has been outcompeting yield gains in field production and greenhouses by orders of magnitude. As droughts across the U.S. — and the rest of the world — intensify, its promise to use water more efficiently is also encouraging. But the Controlled Environment Agriculture (CEA) industry is still a drop in the bucket compared to traditional farming. Much work lies ahead to overcome major challenges such as sourcing clean energy and lowering production costs.

Plenty has been a pioneer in indoor agriculture and is constructing its second commercial farm in Compton, California, close to Los Angeles. The startup said the production in this new 95,000 square foot operation will be equivalent to 700 acres of farmland and is scheduled to start next year. Other important players such as Gotham Greens and Infarm also have big plans and AeroFarms is preparing to go public later this year, which may be seen as evidence for a maturing market.

I invited Nate Storey, Plenty’s co-founder and chief science officer, to a conversation about the future of the industry. Dive in to learn how Plenty can expand beyond leafy greens, where government funding and industry collaboration are lacking and why the company’s future may not necessarily lie in the U.S.

Theresa Lieb: You have a few leafy green products out in stores and are currently constructing a large indoor farm close to Los Angeles. Does that mean Plenty is ready to scale?

Nate Storey: Plenty’s technology is pretty much ready. Accessing low-cost capital is our next big challenge. The types of capital the greenhouse industry has available, for example, is the next target for the indoor growing space. We have pretty much a decade of unrestricted growth ahead of us, as do many other players in this space, because the size of the market is massive.

Lieb: Despite large yield improvements, indoor ag is still an expensive way to grow salad. What advancements in control systems, breeding, hardware or other areas are you looking to for improved profitability and product variety?

Storey: In the next couple of years, most of our yield gains will likely be accessed by process improvements. That has elements of robotics, machine learning, precision systems, computer vision and so forth. At the heart of it is figuring out how to streamline processes and make the plants grow at a maximum rate. It’s not all shiny and sexy necessarily. But when you partner good old-fashioned horticulture with things like robots and great software and some other tools we have, the outcomes are pretty impressive. Our work on tomatoes is an example of that. Over the past years, we’ve fundamentally changed the morphology of the plant. With fundamental breeding work, we turned tomatoes into a crop that works really well indoors with our hardware. When you understand what the plant and business need and bridge those two things with technology, you get really positive outcomes in terms of yield, quality or labor cost.

Storey: Field production is going to be necessary for a long time as are greenhouses. By our figures, the fresh fruit and vegetable industry has to be three times what it is today to meet the nutritional needs of people around the world. So we will be building on top of existing agricultural capacity, not necessarily replacing it, and creating net new jobs. Labor is already a big challenge for field producers but I don’t think we’re going to contribute to those challenges any more than any structural changes in the industry. The rise of robotics, in general, will probably be more impactful on jobs. I think of robots like the modern tractor where you have a farmworker who can now do the job of 10 to 50 people with the help of robotics.

Lieb: In terms of continued innovation, how much do you engage in pre-competitive and collaborative research with other players in the space to overcome shared challenges such as energy use?

Storey: There is collaboration taking place through the CEA Food Safety Coalition and there’s a couple of other agencies and programs that are focused on research. Those things are good and necessary but I think that the real rubber meets the road when universities start to get funded in meaningful ways to help the industry. Until then, it’s going to be relatively small projects, as folks aren’t very open in the industry. It’s actually something I’ve been thinking about a lot. How do we share more information? For example, I would challenge everyone to drop the non-competes in their employment contracts so that employees can circulate amongst the businesses more often. That’s one way to share expertise and help everyone grow. Early on, there were also a lot of things that folks viewed as trade secrets. But now that there are enough unique systems out there with protected IP positions and patents, we will likely see more collaboration over the next years.

Lieb: What needs to happen to get more funding to universities? Will you fund research yourself or where do you see the money coming from?

Storey: We do support some of these research projects already but the reality is that our industry is still tiny. These types of things have to start with the conviction at the government level that we are in a unique position to solve many challenges. We work on a national security issue, a food and consumer safety issue, an opportunity to expand the offerings and lower the cost of fresh healthy food to food deserts — all things that a government official could look at and get really excited about. Then we could get equal treatment with the field and greenhouses and make sure the government is funding university research to help the industry and produce some very talented young people to come work for us.

Lieb: So how much do you engage in policy to influence the government’s view of the industry?

Storey: The government moves at a glacial pace. In two years at Plenty, we’ve increased our yield by 600 percent and we will break world record yield ranges regularly. That’s just too fast for many folks in government to keep up with. When officials see this industry transition from a strange experiment with technology to a legitimate production technique, they might start seeing it as an emerging industry. The Dutch are already interested. They have their eyes on it because the Netherlands has had kind of a global monopoly on high-tech greenhouses for a very long time. Understandably, they are defensive but also very interested in new technologies that could outcompete them or be a meaningful addition to their high-tech production supremacy. The Dutch are by far the most primed to embrace it at a government and industry level, assuming they can get around some of the very conservative growers. Then the next set of governments is going to be in Asia. Because there’s already a lot of issues with food safety and supply in many parts of China and countries like Singapore and Japan that import much of their food. I hope the U.S. government doesn’t miss the boat.

Lieb: If not, can you imagine Plenty moving its efforts to Asia, for example, or do you want to make things work out here?

Storey: Definitely. I think a lot of vertical farms will be forced to travel the world and go to the places where the need is greatest. There are market advantages to growing indoors and we don’t always appreciate them in the U.S. where we have so many purchasing power advantages.

(Note: This interview has been edited for length and clarity.)

The Most Extreme Complex Life in the World
Launch Recap: NASA and SpaceX fly Astronauts to the Space Station
Could Solar Panels in Space Solve all Our Energy Needs?
Why Do Heart Cells Turn into Bone?
This Hot Jupiter Is Leaking Metal! | SciShow News