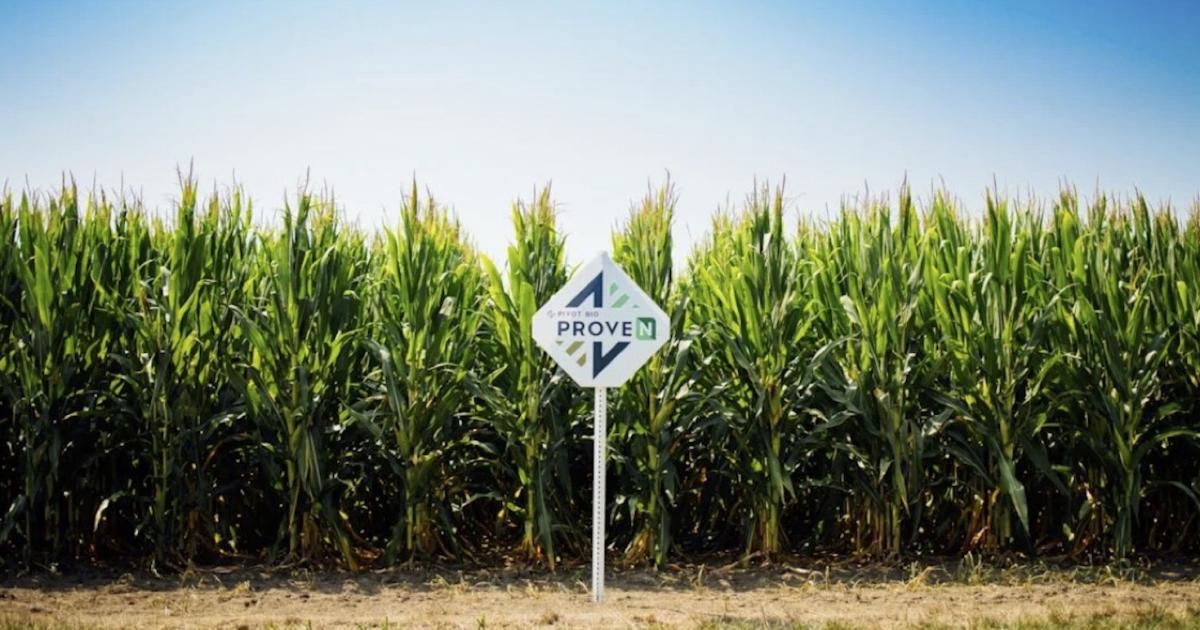 In 1918, German chemists Fritz Haber and Carl Bosch created a process to produce ammonia fertilizer that was cheap and effective. It’s still the most commonly used fertilizer on fields today. Pivot Bio and its CEO, Karsten Temme, are working on changing that.

The Haber-Bosch method pulls nitrogen from the air (a process called nitrogen-fixing) to create fertilizers that can be applied to plants. Nitrogen is the main limiting factor for plant growth. Adding more nitrogen to the soil helps plants grow larger — feeding more people and earning more profits for farmers.

But synthetic nitrogen-based fertilizers have caused environmental water quality issues and weakened soil health. They account for about 195 million metric tons of carbon emissions annually in the U.S. alone, according to the American Carbon Registry. The impact of this industry has increased 30 percent over the past 40 years, according to a study published in Nature. This is a big market: A Global Market Insights report estimates revenue from fertilizer market to be over $170 billion annually in 2020, and the sector is expected to grow to $210 billion by 2027.

“There’s really the recognition that dumping synthetic fertilizers on fields is causing all of these environmental problems,” said Maren Friesen, associate professor at Washington State University, Department of Crop and Soil Sciences. “It’s the runoff, and the high energy inputs, which are still primarily derived from fuels that are required to produce and transport these fertilizers.”

Startup Pivot Bio is taking a different approach. Instead of using the chemical process that uses high pressure and energy to create ammonia, the company is taking advantage of nitrogen-fixing bacteria to create its soil enhancement products. The naturally occurring process has been used to help plants such as legumes extract nitrogen from the soil, an important nutrient for plants to grow. As farmers bred plants for size and productivity, they got to a point where crops could grow bigger and produce more than the microbes in the soil could supply nitrogen for. Nitrogen-based fertilizer solved this problem by allowing the nutrients to keep pace with the plants. But the excess nitrogen also shut down the nitrogen-fixing enzymes in the microbes.

Pivot Bio’s products are specific microbes that have been reverse engineered to enhance the absorption of nitrogen in the plants. The company grows these microbes via fermentation, which is less costly in terms of emissions than the Haber-Bosch process.

Pivot Bio isn’t the only startup trying to take advantage of nitrogen-fixing microbes to address the negative impacts of synthetic fertilizers. Two include Bayer Venture’s Joyn Bio in Boston and BioConsortia in Davis, California. Andes, another company combining microbe nitrogen-fixing technology with seeds, announced a $15 million Series A lead by Leaps by Bayer, the impact investing arm of Bayer AG.

Pivot Bio’s product, Proven 40, is designed to work specifically on cereal crops such as corn, wheat and sorghum. While Pivot hopes that its product will reduce reliance on synthetic fertilizers, for now it still has to be used in conjunction with traditional fertilizers because it can’t yet provide the entire amount of nitrogen the plants need.

“It’s shifting the balance,” Temme said. “[The product] delivers 40 pounds directly delivered in a plant, and it’s not at risk of being lost to the environment. And then with each version of our product, it’s going to be a bigger fraction of your whole nitrogen budget, that you don’t have to worry about. You know it’s going directly into the plant.”

Now we have the chance to usher in this entirely better way of doing things that’s going to have benefits not just for the farm’s economics but also the entire environment around us.

“[Synthetic] fertilizer has been a good way to get things done until now,” Temme said. “And now we have the chance to usher in this entirely better way of doing things that’s going to have benefits not just for the farm’s economics but also the entire environment around us.”

Pivot Bio makes some bold claims. The company has an internally produced performance report based on a variety of experiments putting Pivot Bio up against controls in many fields, locations and years. The performance report isn’t an independent study, but academic experts still think Pivot Bio’s research is a cut above others due to the presence of controls, scientific methods used and the variety of locations.

“[Such companies] don’t always have the controls that we would use as researchers,” Friesen said. “I was actually pretty impressed looking at their data, although I do obviously have lots of questions.”

Friesen focused on how the nitrogen in the soil responded to Pivot Bio when used with a full amount of synthetic fertilizers. She was puzzled that while the average farmer saw an increase in nitrogen per acre, some saw dramatic decreases in their nitrogen stores after applying Pivot Bio’s product.

“If I was a farmer whose field was on the far right side of that graph, I would be like, ‘Hey, why does my corn have like 50 pounds per acre less nitrogen with your products than the other half of my field?'” Friesen said.

When I brought the question to Temme, he pointed to the fact that all fields have variability, and there might have been a confounding factor — an unmeasured third variable that influences the outcome — in those fields, such as pests or temperature differences, that could account for the decrease in nitrogen production.

But according to Temme, a big selling point of Pivot Bio is its consistency and that farmers know the nitrogen won’t be lost before it gets into the roots. The microbes aren’t at the whim of precipitation and grow with the plant, delivering exactly the amount of nitrogen that is needed.

“When we apply [traditional ammonia] fertilizer, we apply it to the soil, not to the plant,” Temme said. “And then it’s incumbent on the plant to have its roots reach out to the pockets of nitrogen fertilizer in the soil. It’s a race against time because every time there’s a snow or rain, or weeds or other microbes in the soil, all of those things can begin to chip away at how much [traditionally synthetic] fertilizer is remaining in the soil for the plant’s roots to go find.”

Right now, Pivot Bio’s products for corn, sorghum and wheat are commercially available. While working with individual farmers is a great start, Temme knows that to really make an impact, his startup needs to engage with the big consumer-facing food brands.

The food sector needs to start taking concrete action to reduce its greenhouse gas emissions. Temme believes the focus on carbon offsets is misplaced if these companies want to make a significant impact. Instead, he wants them to turn their attention to reducing synthetic nitrogen, which is where he thinks agricultural players can make larger and quicker improvements on reducing emissions.

12 BEST Kinect HACKS
Why Are Challenge Videos a Thing?
3 Myths About Astronaut Food
Did Aliens Nuke Mars? | NASA’s Unexplained Files
Why America Has More Tornadoes Than Anywhere Else In The World