The black carp is an invasive species of fish detected in Kentucky’s waterways for the first time in 2019.

Because it is endemic to East Asian lakes and rivers, the black carp is also known as the “black Chinese roach.” Because of its scarcity, the black carp was frequently utilized in Chinese medicine and was considered a costly meal.

Snails, mussels, and clams make up the majority of the black carp’s diet.

The black carp’s teeth are big, sleek, and powerful enough to break mollusk shells. In addition, it possesses molars that resemble those of a human. 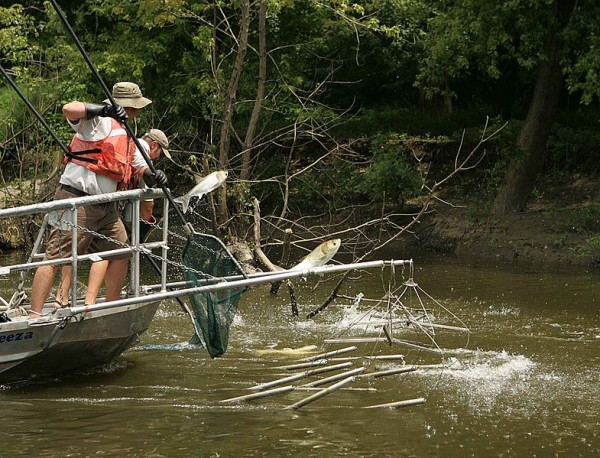 The black carp were initially imported into the United States in the 1970s as part of an Asian cargo. Later, it was used to control the number of snails in retention ponds and aquaculture facilities.

The carp, however, wound up in the Mississippi and Missouri Rivers owing to floods in the South.

In the United States, black carp are considered a major danger to mollusks. As a result, some of these mollusks are on the verge of extinction. In addition, the black carp may potentially carry parasites and illnesses that can infect other species in the area. Therefore, controlling the behavior of black carp is a priority. Poisoning is one of these techniques, as it encouraging people to catch and eat them as food.

Black carp eat mollusks and snails, which account for up to 20% of their body weight each day.

If they establish themselves in the Great Lakes, black carp might represent a serious threat to Michigan’s native mussel populations. Many of these species are endangered, threatened, of particular concern, or in need of protection.

Black carp would compete with mollusk-eating native fish such as freshwater drum, redhorse species, and the state-endangered lake sturgeon for limited food supplies.

Partnering Up for a Solution

Illinois and Michigan governors agreed today to collaborate to safeguard the Great Lakes against invasive Asian carp species. Governors Gretchen Whitmer and J.B. Pritzker today announced an intergovernmental agreement between the Illinois Department of Natural Resources (IDNR) and the Michigan Department of Natural Resources (MDNR), allowing Illinois to use up to $8 million in funds appropriated by the Michigan Legislature in 2018 to support the pre-construction engineering and design (PED) phase of the Brandon Road Ecosystem Restoration Project.

The State of Illinois also signed a separate PED agreement with the US Army Corps of Engineers for the original Brandon Road design, further solidifying the route ahead. In addition, the state will act as the project’s non-federal sponsor, agreeing to assist pay the design of a section of the project and push the entire project design work to around 30% completion.

The Brandon Road Lock and Dam in the Chicago Area Waterway System in Joliet, Illinois, is a crucial pinch point for keeping bighead, silver, and black carp out of the Great Lakes, the most invasive Asian carp species of concern. The Brandon Road project would include layered technologies such as an electric barrier, underwater sound, an air bubble curtain, and a flushing lock in a newly constructed canal meant to restrict invasive carp migration while permitting barge transit.

For the most recent updates from the animal kingdom, don’t forget to follow Nature World News!

What Fake Fragrances Teach Us About Sustainability
Can it be too cold to start a fire? @PBS Eons #shorts #science #SciShow
What Really Goes Into Storing Food for the Winter?
Does Psychotherapy Work?
Ancient Genetics that Occur Today: Atavisms Revealed