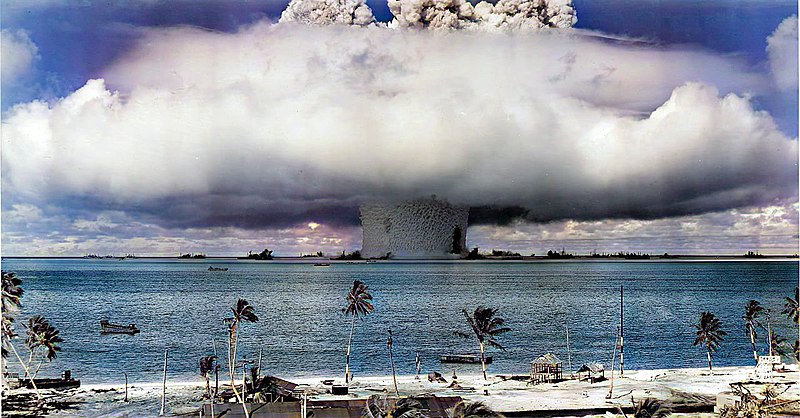 Projection of the worst-case scenario

The said historian developed NUKEMAP, a nuclear bomb simulator that can project the effects of the detonation of such a weapon anywhere on Earth. The user interface consists of a map on which users can specify a hypothetical location for a nuclear bomb explosion.

The simulator models the local impacts of the blast showing radial impact areas. Parameters such as the strength of the nuclear weapon and the height of the detonation are included in the calculations.

NUKEMAP also models the behavior and spread of the nuclear fallout, the dimensions of the mushroom clouds, and predicts the resulting number of deaths and injuries in the affected areas.

Wellerstein describes NUKEMAP as an educational tool that can simplify the concept of nuclear weapons effects and help interpret the scale of a blast map.

Wellerstein points out the importance of raising awareness of the effects of a nuclear weapon exploding, especially since the media always brings current issues on this topic to the front page.

The professor says that common misinformation about nuclear bombs includes worldwide destruction altogether. Some think that nuclear bombs have the same impact as conventional bombs. Wellerstein explains that while nuclear weapons can cause immense destruction, the effects are still comprehendible on a human scale.

NUKEMAP also allows people to visualize the effects of a nuclear bomb explosion in places that are familiar to them through arbitrarily chosen geographic locations.

Read also: Survival 101: Here are 7 Animals That Can Survive a Nuclear War

Nuclear fallout is when short-term radiation escapes from the mushroom cloud that follows the detonation of a bomb. Short-term radiation in this context refers to the radioactive residue from the explosion, which usually persists for the following weeks or months rather than years.

Wellerstein pointed out the challenge of modeling nuclear fallout because it is affected by many relevant variables, such as the type of terrain, weather conditions, and the distance of the nuclear bomb blast from the site.

In the mid-1950s, the USSR developed the Tsar Bomba, the most powerful nuclear weapon ever developed and tested. Tsar Bomba has an explosive force equivalent to about 50 megatons of TNT – about 3,300 times more powerful than the “Little Boy” atomic bomb (15 kilotons) dropped on Hiroshima by the United States during World War II.

For the demonstration, Wellerstein used NUKEMAP to simulate the detonation of the Tsar bomb at 13,000 feet above various cities. The simulated blast map resulted in 7.6 million deaths and 4.2 million injuries if the bomb had detonated over New York City, New York.

Wellerstein points out, however, that NUKEMAP provides only estimates. Several factors could make a big difference in the real world.

NASA’s Psyche Mission to an Asteroid: Official NASA Trailer
How Saturn’s Moons Could Help Us Live in Space
How Big Is Planet Earth?
The Scientist Who Made the Internet Possible | Great Minds: Narinder Singh Kapany