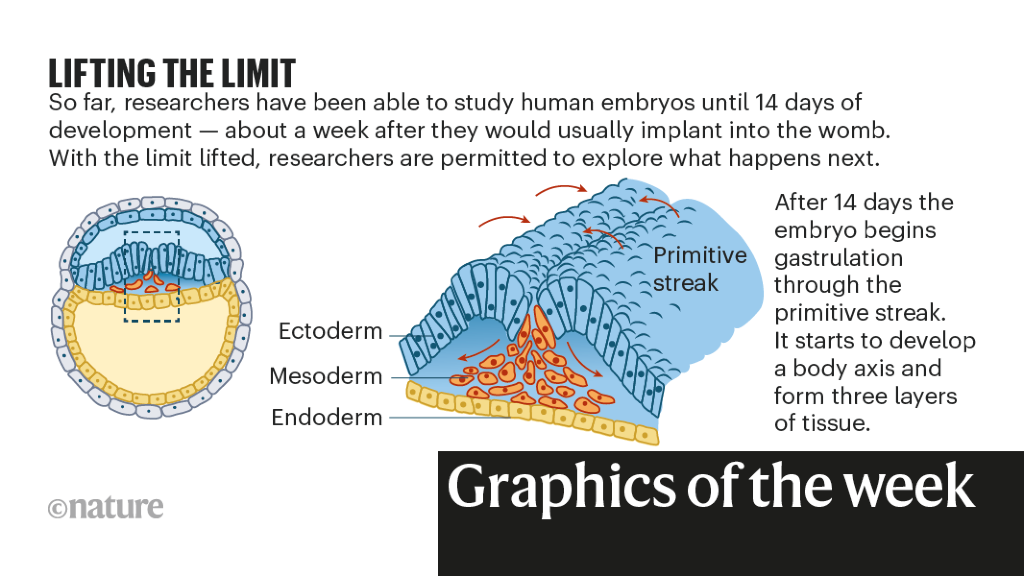 The future of lab-grown embryos

In May, the International Society for Stem Cell Research released new guidelines that relaxed the 14-day rule, an international consensus that human embryos should be cultured and grown in the lab only until 14 days post-fertilization. The change allows scientists, in countries where it is legal, to seek permission to continue research beyond this point.

Such studies could reveal what happens during human development after the embryo would normally have implanted in the uterus. Roughly between days 14 and 22, it enters gastrulation, when the body’s main pattern emerges and the foundations are laid for organ generation. Studying these stages would allow scientists to better understand the nearly one-third of pregnancy losses and numerous congenital disabilities thought to be triggered at these points in development.

How humans journeyed into Arabia

Humans and our hominin relatives have repeatedly dispersed from Africa into the Arabian Peninsula over the past 400,000 years. We know that humans might have reached Australia as early as 65,000 years ago (65 ka). However, when and how often they dispersed from Arabia across southern Asia to India and southeast Asia has been unclear. A Nature paper published this week reports the excavation of artefacts at the Khall Amayshan site (called KAM 4) in Saudi Arabia, which correspond to five periods of occupation. Together with other dated evidence from the Levant, Asia and Australia (a few examples of which are shown here), a more complete picture is emerging of these early dispersals. It suggests there were pulses of immigration linked to periods of rainfall — creating ‘green’ windows when conditions were favourable.

Aromatic molecules such as benzene are some of the most useful building blocks of chemistry. But benzene rings, which contain six carbon atoms connected in a hexagon, are also exceptionally stable, and very few reactions are known to break them open.

A process called hydroisomerization breaks up benzene rings at high temperatures, but is unselective, producing a mixture of hydrocarbon products, shown in (a). Dioxygenase enzymes can also do the job, but result in a single product called muconic acid (b). Researchers have now reported another method: a copper-catalysed reaction in which benzene derivatives react with oxygen and an oxidant (sodium azide; NaN3) to produce alkenyl nitriles (c). The reaction is thought to proceed through an unstable intermediate called a bis(nitrene). The authors show that their benzene-busting protocol can work on molecules with complicated structures, providing a new approach for chemically manipulating natural products, dyes and pharmaceuticals.

The bond that breaks is highlighted in red, and the carbon atoms in the benzene ring are numbered to show how they translate from the starting material to the product. R represents a range of reactive chemical groups; L is a ligand molecule; Cu, copper.

What’s next for lab-grown human embryos?

Broken skulls of children tell of an ancient massacre

Multiple hominin dispersals into Southwest Asia over the past 400,000 years

Traces of a series of human dispersals through Arabia

What Really Goes Into Storing Food for the Winter?
Can it be too cold to start a fire? @PBS Eons #shorts #science #SciShow
The Spacecraft That Wasn’t Designed To Land, But Did
Why Psychology Tells Us What We Already Know
Ancient Genetics that Occur Today: Atavisms Revealed