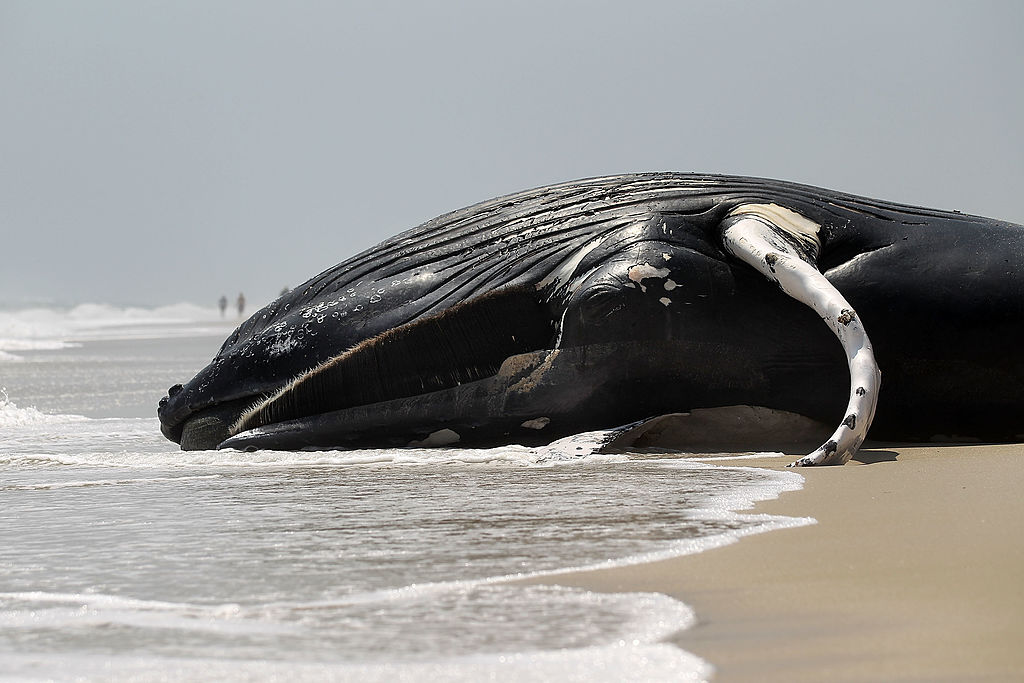 Scientists have uncovered signs of two human-caused injuries in the 38-foot dead humpback whale, that was discovered floating in the seas off Staten Island on Friday.

The whale was discovered laying on its back with its blowhole below the water’s surface, “which is usually a good sign that the animal has been dead for some time,” according to Robert DiGiovanni the Founder and chief scientist of AMSEAS, with an estimated weight of 30 tons (27 metric tons) and a length of 38 feet (11.6 meters), it had to be transported and eventually buried with an excavator. During the necropsy, they utilized heavy construction equipment to create a deep hole on the sand beside the whale, according to DiGiovanni.

As efforts on determining a cause of death progressed, they inspected the whale and gathered samples. Fisheries experts from the state Department of Conservation, the city Parks Department, and the National Oceanic and Atmospheric Administration (NOAA) have been collaborating with the Long Island-based non-profit group.

According to Rob DiGiovanni, a necropsy (animal autopsy) was done on the whale, which was determined to be in good physical condition and had a full stomach of fish, indicating he had just been fed.

DiGiovanni anticipates that whatever happened to the whale to trigger its death happened “acutely or rapidly” since the whale contained food in its stomach.

The cause of death will not be known until samples taken during the test are examined.

Stranding: Phenomenon Which May Occur Simultaneously

Thousands of whales, dolphins, and other marine species wash up on beaches all around the planet annually. Beaching or stranding is a phenomenon that occurs in both healthy people and damaged (or dead) animals who are blown ashore by strong winds. Mass stranding occur when a group of marine creatures’ beach themselves simultaneously, and other times an area may see an unusually high number of marine debris over a period of time.

Since 1990, the Cetacean Stranding Investigation Program (CSIP) of the Zoological Society of London has documented over 12,000 stranded cetaceans in the United Kingdom. High-profile incidents, such as the stranding of more than 300 sei whales in southern Chile’s Patagonia area in 2015, or a string of beaked whales washing up on the shores of Guam between 2007 and 2019, demonstrate that this is a genuinely worldwide phenomenon.

According to Dan Jarvis, a welfare development and field support officer with British Divers Marine Life Rescue, a beached whale might be sick or injured, senile, disoriented, unable to eat or otherwise compromised-for example, undergoing a tough labor-or just old. Weakened animals may float with the current until they are rescued, while bewildered animals may stray into shallower waters by mistake.

A Universe of Possibilities to Explore at Home on This Week @NASA – April 3, 2020
First Images of the James Webb Space Telescope (Official NASA Broadcast)
Could Solar Panels in Space Solve all Our Energy Needs?
#EZScience: OSIRIS-REx Touches Down On Bennu
The Most Extreme Complex Life in the World