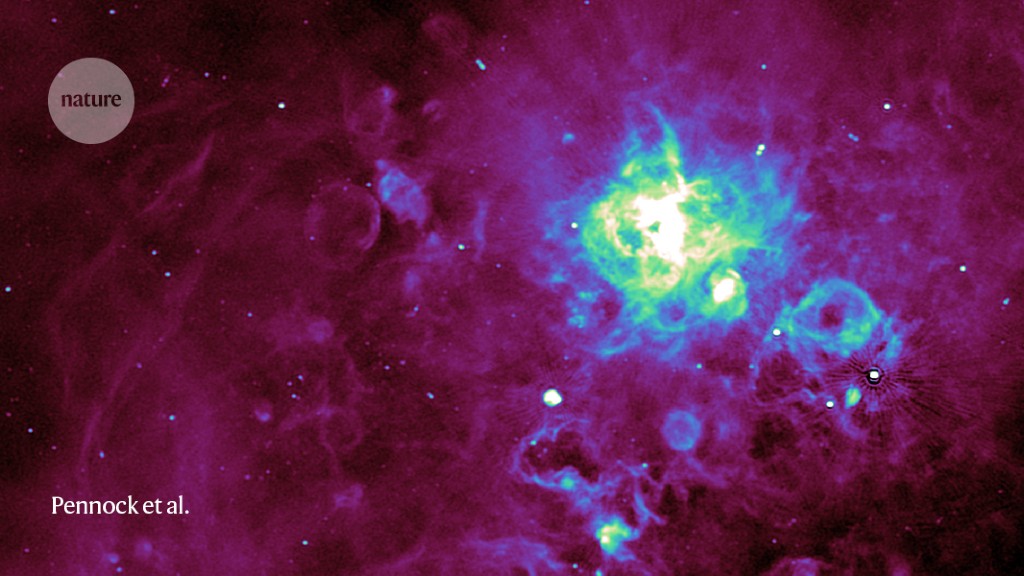 Astronomers have confirmed that an object they thought was a distant galaxy is actually the brightest extra-galactic pulsar ever seen. The team made the discovery using a technique that blocks a particular type of polarized light, similar to polarized sunglasses, which could be used to spy more ‘hidden’ pulsars.

Pulsars are highly magnetized spinning neutron stars. As pulsars spin, they release radio waves from their poles — and these can be detected as a ‘pulse’ using radio telescopes. Astronomers use pulsars to test theories of gravity and to look for signs of gravitational waves.

The new pulsar, called PSR J0523−7125, is about 50,000 parsecs from Earth, in the Large Magellanic Cloud, and is different from most known pulsars. Its pulse is very wide and exceptionally ‘bright’ on the radio spectrum, says Yuanming Wang, an astrophysicist at Australia’s Commonwealth Scientific and Industrial Research Organisation in Canberra.

Wang and the team say that the pulsar is ten times brighter than any other pulsar found outside the Milky Way. Their study was published in The Astrophysical Journal on 2 May (Y. Wang et al. Astrophys. J. https://doi.org/hs4n; 2022).

Pulsars are typically identified from their faint pulse, flickering periodically. But in the case of PSR J0523−7125, its pulse is so wide and bright that it didn’t fit the typical profile of a pulsar and was dismissed as a galaxy.

Wang and the team first suspected that the object might be a pulsar on the basis of data from the Variables and Slow Transients survey, conducted using the Australian Square Kilometre Array Pathfinder telescope in Western Australia. The survey looks at part of the sky for highly variable radio-wave sources.

Emissions from pulsars are often highly polarized, and some of them oscillate in a circular way. Few space objects are polarized like this.

Using a computer programme, the team blocked out wavelengths of light that were not circularly polarized, revealing the pulsar.

“We should expect to find more pulsars using this technique. This is the first time we have been able to search for a pulsar’s polarization in a systematic and routine way,” said co-author, Tara Murphy, a radio astronomer at the University of Sydney in Australia, in a press release.

Replacing just 20% of global beef consumption with a meat substitute called mycoprotein within the next 30 years could halve deforestation and the carbon emissions associated with it, finds a mathematical model that took into account estimated increases in population growth, income and livestock demand between 2020 and 2050 (F. Humpenöder et al. Nature 605, 90–96; 2022).

The model suggests that, under a business-as-usual scenario, the global increase in beef consumption would require the expansion of pasture areas for grazing and of cropland for feed production, leading to increased deforestation, methane emissions and agricultural water use.

Replacing 20% of the world’s per-capita beef consumption with mycoprotein by 2050 would reduce methane emissions by 11% and halve the annual deforestation and associated emissions, compared with the business-as-usual scenario (see ‘Meat substitution’). Swapping 50% of the beef consumed per person for mycoprotein would result in a more than 80% reduction in deforestation and carbon emissions, and replacing 80% of beef with mycoprotein would eliminate about 90% of forest loss.