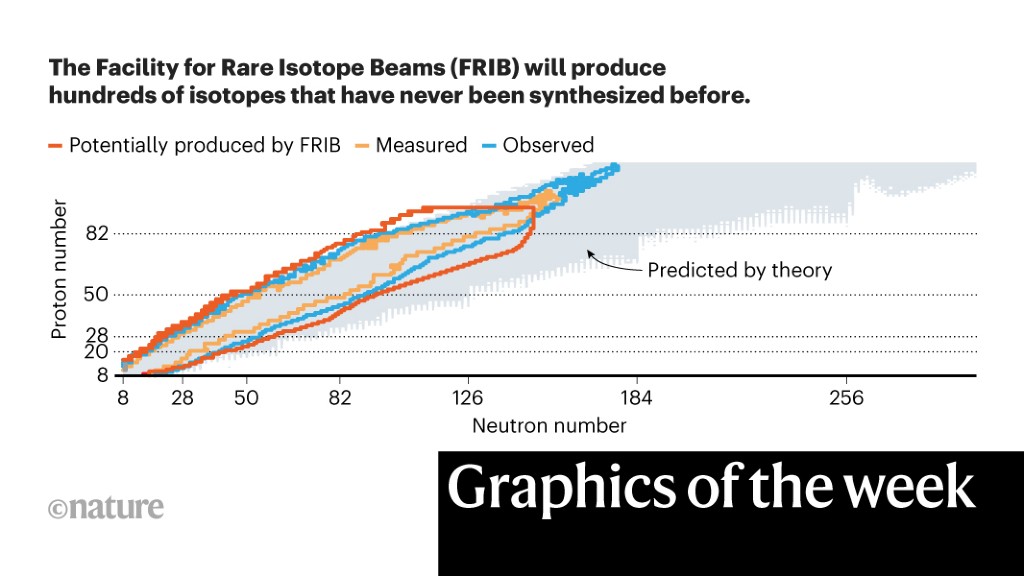 This chart portrays some of the unexplored regions of the landscape of exotic atomic nuclei. Physicists have only tentative knowledge about some isotopes. Simplified models predict some features, but nuclei are complex objects with many moving parts, and it is impossible to predict their structures and properties exactly.

After a decades-long wait,a US$942 million accelerator in Michigan officially opened on 2 May. The Facility for Rare Isotope Beams will be the first to produce and analyse hundreds of isotopes crucial to physics, and shed light on how stars and supernovae create most of the elements in the Universe.

Researchers this week reported a robot that can leap up to 33 metres high — almost the height of the Statue of Liberty and a record for a jumping robot.

Before take off, a rotating motor in the nose cone is attached through a string to a spring built from carbon-fibre beams and rubber bands (b). As the motor winches and shortens the string, the spring is put under tension, giving it a very high amount of stored energy per mass. The arm is held in place until the wedge makes contact with the latch – freeing the string and releasing the stored energy (c). The robot morphs into an aerodynamic rocket shape – and up it goes. (You can watch it leap in our this fantastic video. )

Our final graphic shows persistent racial disparities at the National Institutes of Health (NIH), the largest funder of biomedical research in the world. Only 1.4% of NIH senior investigators identify as Black, for example. The NIH has committed to address these inequalities, but some researchers would like to see more action from it to bolster the diversity of the biomedical workforce. Our newsfeature story reports on changes that scientists are eager to see at the NIH at a key time, as it learns lessons from the pandemic and with a new director soon to take the helm.

What If A Mega Earthquake Hit California
Does Psychotherapy Work?
Ancient Genetics that Occur Today: Atavisms Revealed
The Spacecraft That Wasn’t Designed To Land, But Did
Why Psychology Tells Us What We Already Know