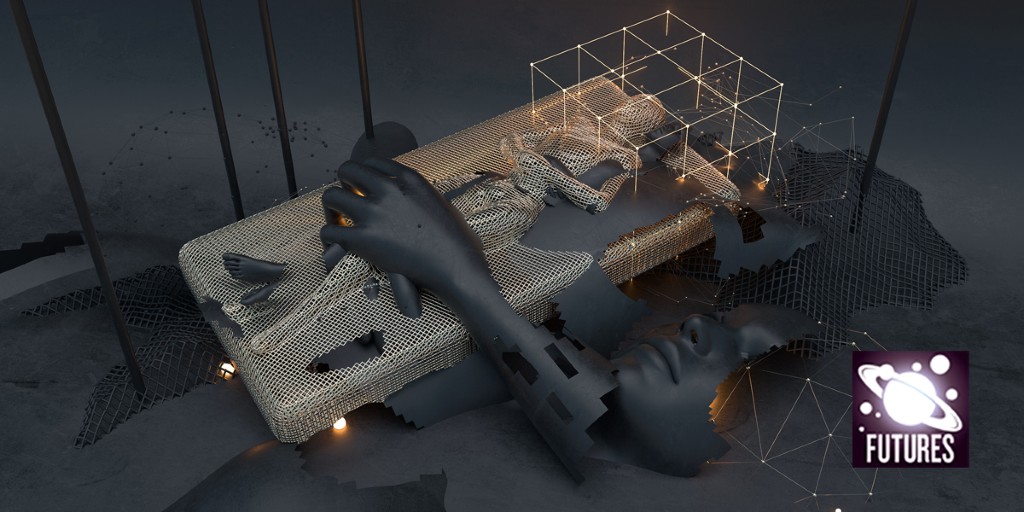 I’m sorry I set fire to your foot.

You’d been gone for two months by then, on your third or fourth life, I never could tell. Your brainwaves were going crazy, the base sine jumping all over the scanner read-out. Even your heart rate was mad: 150 beats per minute. Neural feedback leakage; your heart trying to catch up with you.

I thought it would give out any minute, kept forcing beta blockers into your bloodstream, but it kept beating, like you were fighting to stay alive.

That’s why I set fire to your foot, using the jellied petrol you’d insisted we make, back when you believed we’d be attacked, by the government, by raiders, by other survivors. I thought it would force you to wake up.

It didn’t, of course. You were going much too fast by then. I could see it, once I learnt how to read the logs. You kept going to the doctors, kept getting diagnosed with everything from peripheral neuropathy to aggressive athlete’s foot. It didn’t help. Nothing you did inside helped. The system couldn’t see that your body was on fire.

I put it out, once I saw it wasn’t helping, once I got past the rage that followed. I wrapped your blistered sole in synth-skin and bandages and cried until I couldn’t breathe.

I was so afraid of being alone, all the time ignoring the elephant in the room, that I had been alone for a long time, even before you crawled into your virtual world and locked the door behind you.

I stayed by your bed, watching your brain waves, wondering what you were seeing, why you loved it more than me.

In time, hunger drove me away from your side, exhaustion dried my tears, and anger drove me to the farthest part of our little buried, concrete-and-steel world.

You always refused to open the blast door, calling our hideout a vault, claiming that all manner of evil would find us if we did.

I kept thinking that, every time I passed our gun room, the shelves with their black shapes beckoning.

You’d forbidden me from going there, told me that the guns weren’t for me. Maybe they hadn’t been. You’d been saving them for the battle against evil. It had never come, even as the world died, and the guns remained. I went in and took one, a small one. Everything was preferable to being alone.

Maybe I would have crawled into the virtual world, if you’d cared enough to teach me how to live there, how to hook myself up and forget the real. But you hadn’t, and now you couldn’t, and it wasn’t an option for me. That was your choice. My choice was different.

The backpack is full. Canned goods, water bottles, medical supplies. Even a book. I figure you won’t miss them, if you ever wake up. You have your machines.

Me, I have the door.

Filip Wiltgren reveals the inspiration behind I’m sorry I set fire to your foot.

Most of my flash stories come together from disparate elements. This one came together from the genre of cyberpunk, the game Fallout, and a terrible itch I had while reading to my toddler before bedtime.

I’ve always been a fan of cyberpunk, ever since I encountered books by William Gibson and Neal Stephenson. But what truly drew me into it were two other books.

I read Hardwired by Walter Jon Williams and it changed my world. I’ve reread it at least a dozen times since then, and it still engages me, transporting me into a world where corporations carve nation states into pieces and modern cowboys run life-saving drugs past invisible borders, swimming in the virtual control systems of heavily armed and armoured hovertanks while listening to the sad tunes of steel guitars.

The second book that changed me is Changeling by Chris Kubasik. I’d never have encountered it, if I hadn’t been playing the Shadowrun role-playing game. I’d never have picked it up, if I wasn’t liking the rest of the Shadowrun books — Changeling is the most egregiously mis-covered book in the history of the world. The book is a coming-of-age story featuring a genius who transforms into a troll, and has to prove himself to his family while being a runaway and an assassin for hire. The cover features a white-shirted, rippled, man-chest with fangs. If I ever write a bad parody of a paranormal romance, that’s the cover I’ll use.

But the book was everything I needed. An underdog, hurt and hunted. An impossible problem. A protagonist who wouldn’t give up. A monster with a heart of gold. Magic. And cyberpunk.

I won’t wax eloquently (mainly because I don’t know how) about these books, but if you haven’t read them, at least try Hardwired. Changeling might be a little on the gratuitous power fantasy side of things for some people. For teenage me, it was exactly what the story-doctor ordered.

Fallout, well, all I can say is, if you don’t know the Fallout franchise, and have any attraction to 1950s pulp adventure science fiction, then you’ve got one amazing ride ahead of you. Try it. If nothing else, you’ll get transported through time.

How to Escape Quicksand
This Hot Jupiter Is Leaking Metal! | SciShow News
Why You See Monsters in the Mirror
Why Do Heart Cells Turn into Bone?
Could Solar Panels in Space Solve all Our Energy Needs?