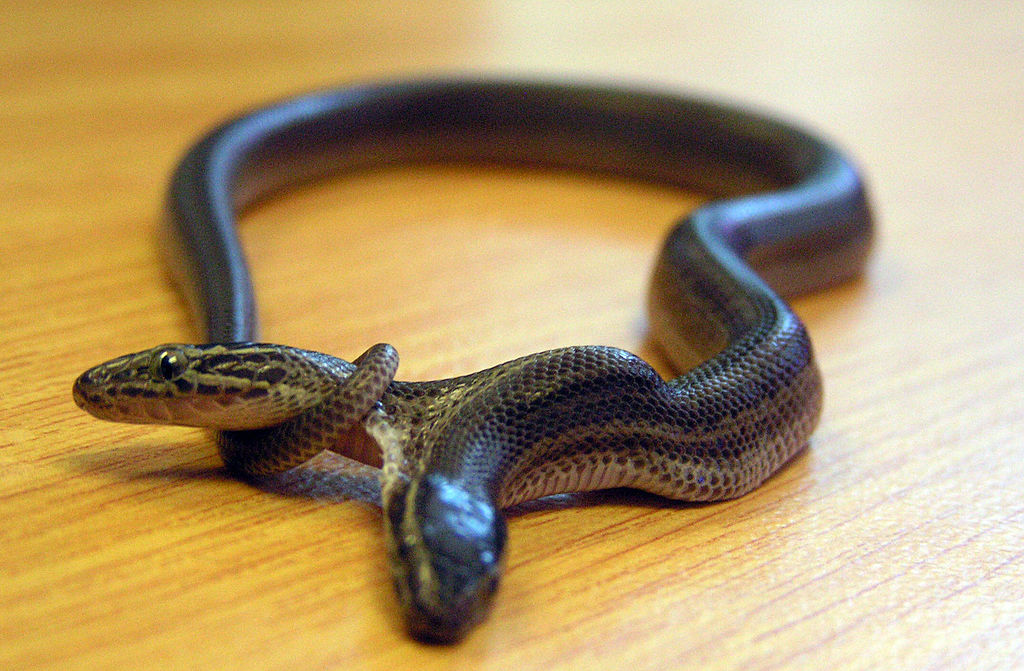 A rare two-headed snake stuns scientists as it marks its 17th year of “defying the odds”.

The reptile, currently at the care of Cape Girardeau Conservation Nature Center, defies odds “of one in 100 million to survive” not just into adulthood, but its late teens, according to Mirror. It was first found in 2005 in the US state of Missouri and now lives at the Cape Girardeau Conservation Nature Center, measuring five feet long. Snake experts say the “unique creature” has defied all expectations.

“I know of another two-headed snake that survived until it was 20, so it isn’t impossible for them to survive that long,” said Steve Allain, a council member of the British Herpetological Society and expert in snakes. “However, it is extremely unlikely,” he added, and “rarely seen in millions” as the two-headed snake must be fed from both mouths if these were to survive, PiPa News quoted.

One in a Hundred Million

Alex Holmes, a naturalist at the conservation center, describes the challenges faced by the serpents, specifically in their eating habits.

“A normal snake of their size would be capable of eating full-sized mice with ease,” he explains. However, he notes that “their conjoined spine makes it more difficult to swallow all but very small, young mice, which they take thawed from frozen.”

In addition, each head was known to be competitive when it comes to eating and had to cover one with a cup for the other to feed first. “We wait a period of time to make sure the food has passed their junction to avoid a ‘traffic jam’ from the left and right head’s meals meeting in the oesophagus,” Alex said.

Although they share one stomach, they are fed individually to “stimulate their natural instincts and provide some mental enrichment.”

According to the experts, the now 17-year-old conjoined snake may have never reached this age and survived in the wild as they “argue as sisters” and seem to get confused with which direction to go, as per the MDC’s Cape Nature Center.

“But if a hungry hawk, skunk, or raccoon came along in the wild that slow reaction to danger would make them an easy meal.”

Also read: Over 100 Baby Crocodiles Hitch Ride on Their Dad’s Back

‘Impossible’ to Calculate such Long Odds

Paul Rowley, a herpetologist at the Liverpool School of Tropical Medicine, said that it is already difficult enough for any normal hatchling or newborn snake to live, and there will be some that die for no known real reason within a group.

“But with animals that are conjoined like snakes with two heads, you’ve got problems with how compatible are they to each other, what organs are shared, and how they’re cared for,” he noted. “And, again, it’s like any conjoined twins – if one gets ill or one has organ failure or problems, it’s obviously going to affect the other one, so you’re doubling the problem.”

For the two-headed serpent, also known as the black rat snake, reaching 17 full years is already a real achievement.

Related article: 5,000 of the World’s Smallest Penguins Swarm the Shore of an Australian Beach

Could Solar Panels in Space Solve all Our Energy Needs?
Science Launching on SpaceX’s 23rd Cargo Resupply Mission to the Space Station
#EZScience: OSIRIS-REx Touches Down On Bennu
The Single Celled Dog
This Hot Jupiter Is Leaking Metal! | SciShow News