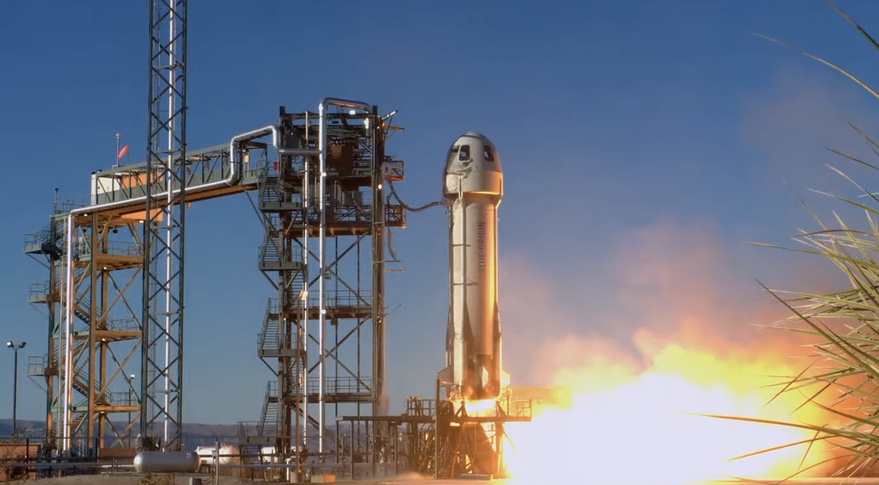 WASHINGTON — Blue Origin launched its New Shepard suborbital vehicle on its first flight of the year March 31, carrying six people on a brief trip to space and back.

The vehicle lifted off from the company’s Launch Site One in West Texas at 9:59 a.m. Eastern. The capsule landed under parachutes about 10 minutes later after reaching a peak altitude of approximately 107 kilometers. The booster landed on a nearby pad three minute earlier.

The launch was delayed nearly an hour by several countdown holds, including one that lasted more than 45 minutes. Blue Origin didn’t disclose the reason for the extended hold other than it needed the time to complete safety checks.

The flight was the fourth crewed mission of New Shepard and the second to carry six people. Five of the people are paying customers: Marty Allen, Sharon and Marc Hagle, Jim Kitchen and George Nield. The sixth is Gary Lai, chief architect of the New Shepard system at Blue Origin. The six called themselves the “Roaring Twenties,” a reference to the NS-20 mission designation.

Allen, the Hagles and Kitchen all have business backgrounds, including founding, leading and investing in businesses from retail to real estate. Nield spent his career in the space industry, including a decade as associate administrator for commercial space transportation at the Federal Aviation Administration, which licenses New Shepard and other commercial launch vehicles.

The five were to be joined by Pete Davidson, the comedian best known for being on the cast of “Saturday Night Live.” He was announced with the other five March 14, when the mission was scheduled for launch March 23. But, three days after the announcement, Blue Origin said that Davidson would not be on the flight. Neither the company nor Davidson explained why he had dropped out of the mission.

The company announced March 21 that Davidson would be replaced by Lai, who joined Blue Origin in 2004 as one of its first 20 employees and is now senior director and chief architect for the suborbital system. He has also worked on Blue Origin’s New Glenn orbital launch vehicle, engine development programs and its Blue Moon lunar lander.

The flight was the first for New Shepard since a Dec. 11 flight, the first to carry six people. Bob Smith, chief executive of Blue Origin, said at an FAA commercial space transportation conference Feb. 18 that the company planned to increase its launch rate this year and “easily double” the number of people that fly to space but didn’t state how many launches the company plans for the year. The company flew 14 people on three crewed flights in 2021.

During the company’s webcast of the NS-20 flight, one of the hosts said that Blue Origin “expects to at least triple” the number of people flown to space. That would mean at least 42 people, or seven flights of six people each.

Why 11 Million Embalmed Specimens Are Stored In The Field Museum’s Basement | Colossal Collections
How Much of the Earth Can You See at Once?
Preparing the Space Station for Solar Array Upgrades on This Week @NASA – March 18, 2022
The Spacecraft That Wasn’t Designed To Land, But Did
What Really Goes Into Storing Food for the Winter?