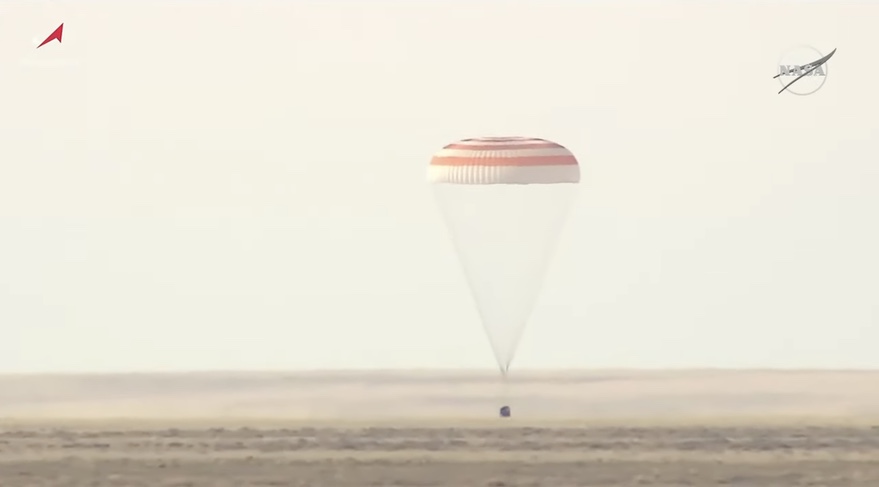 WASHINGTON — A Soyuz spacecraft carrying an American astronaut and two Russian cosmonauts landed in Kazakhstan March 30, an ordinary end of a mission in extraordinary times.

The Soyuz MS-19 spacecraft landed in the designated landing zone in Kazakhstan at 7:28 a.m. Eastern, four hours after undocking from the International Space Station. The landing appeared to go as planned, with the Soyuz commander, Anton Shkaplerov, saying “we’re feeling great” as the Soyuz descended.

The Soyuz returned Shkaplerov, who flew to the station on that Soyuz spacecraft nearly six months ago, as well as Pyotr Dubrov and NASA astronaut Mark Vande Hei. Dubrov and Vande Hei spent 355 days in space, having launched last April on the Soyuz MS-18 spacecraft to the station.

Vande Hei set an American record for the longest single spaceflight, eclipsing the mark of 340 days set by Scott Kelly during a mission to the ISS in 2015-2016. Vande Hei has spent 523 days in space over two missions, third among American astronauts behind Peggy Whitson, at nearly 666 days, and Jeffrey Williams at 534 days.

The landing was like those from previous missions to the ISS, but in times unlike those earlier flights. Russia’s ongoing military campaign in Ukraine has strained relations with the West to nearly a breaking point, including the termination of most civil and commercial space activities with the exception of the ISS.

NASA has emphasized that activities on the ISS continue largely unaffected by Russia’s invasion of Ukraine. “For the safety of our astronauts, the working relationship between NASA and our international partners continues, and that includes the professional relationship between the cosmonauts and our astronauts,” NASA Administrator Bill Nelson said in his “State of NASA” address March 28 at the Kennedy Space Center.

That included a change-of-command ceremony on the ISS March 29 when Shkaplerov formally handed over command of the station to NASA astronaut Thomas Marshburn. “People have problems on Earth. On orbit, we are one crew,” he said in English during the brief ceremony. “I think ISS is like a symbol of friendship and cooperation and a symbol of the future of the exploration of space.”

He mentioned the activities on the station during his time, there, including alluding to a Russian antisatellite weapon demonstration in November that created debris that caused the crew to shelter for several hours. “It’s like some satellites tried to kill us,” he said.

He then handed a ceremonial key to the station to Marshburn, who will serve as commander of the ISS until he departs on the Crew-3 spacecraft in late April.

Preparing the Space Station for Solar Array Upgrades on This Week @NASA – March 18, 2022
Does Psychotherapy Work?
What Really Goes Into Storing Food for the Winter?
What are Scars?
NASA Astronauts Robert Behnken and Douglas Hurley Are Coming Home!