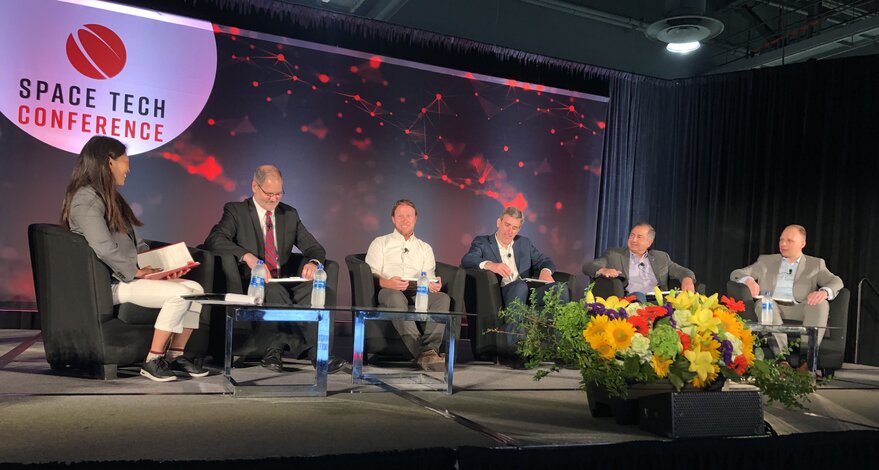 LONG BEACH, Calif. –  A panel of space logistics experts underscored the importance of open standards to encourage the growth of the market.

Over the long term, open standards are necessary “if we really want to build infrastructure in space,” Karol Janik, technology manager for the Manufacturing Technology Centre, an independent U.K. research and technology organization, said May 25 at the Space Tech Expo here.

While not all space systems will be standardized, interfacing parts and communications are likely to follow standards, he added.

“Over the last decade, I think we’ve all benefited from having both Android and iOS platforms because of the competitiveness,” Tadros said. “They can coexist. You can call each other on the phones and share information across platforms.”

“You can still have innovative and maybe even proprietary systems behind that interface,” Roberts said. “For docking, for example, as long as you have the interface to dock, you can put all the proprietary stuff that makes you unique on the other side of the interface.”

NanoRacks grappled with the question of open systems years ago when the company developed microgravity research modules for ISS called Nanolabs.

“We made the decision not to patent that,” said Mike Lewis, Nanoracks chief innovation officer. “Through that, we succeeded in building our own competitors. It’s the rising tide that raises all boats. The more companies that are doing things in space to advance science and research, the better.”

Robert Hauge, president of SpaceLogistics, a Northrop Grumman subsidiary, is eager to see standards adopted for satellite refueling as well as a power and data port.

“There is no space logistics market right now,” Hauge said. “We’re all postulating that it is going to be there.”

To help make that happen, spacecraft need to have standardized ports.

“If we have those on spacecraft, companies will have the opportunity to take advantage of that,” Hague said. “They won’t have to be spacecraft manufacturers to get into this business.”

The Math and Mystery of Murmurations
How to Escape Quicksand
A Universe of Possibilities to Explore at Home on This Week @NASA – April 3, 2020
Launch Recap: NASA and SpaceX fly Astronauts to the Space Station
First Images of the James Webb Space Telescope (Official NASA Broadcast)