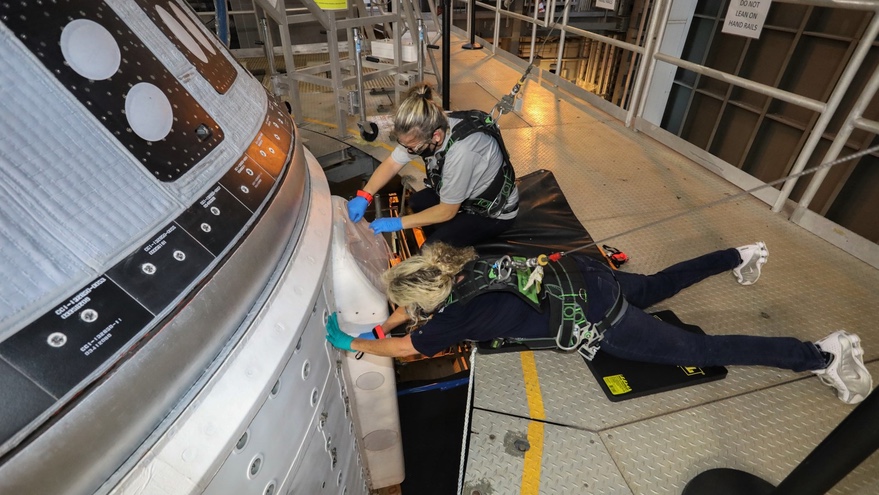 HUNTSVILLE, Ala. — Boeing’s CST-100 Starliner was within hours of launch on its second uncrewed test flight in early August when stuck valves in the spacecraft’s propulsion system forced a launch scrub that has turned into a delay that will extend well into next year.

“It was a tough pill to swallow,” John Vollmer, vice president and program manager of the commercial crew program at Boeing, said of the delay in a recent interview. The company had worked for a year and a half to correct software problems that cut short the first uncrewed test flight, called Orbital Flight Test (OFT), in December 2019.

“We had done a lot of testing on the software. We had gotten really comfortable with that. This kind of hurt because it wasn’t something we had expected,” he said.

Boeing is continuing to investigate what caused 13 valves to stick in the closed position. The leading cause is that nitrogen tetroxide (NTO) propellant, leaking through the valve, reacted with moisture and created nitric oxide, corroding the valve.

“We’ve developed an extensive fault tree to go through and look at every possibility of what it could be,” he said. “We’re 75% through that fault tree. We’re clicking off the boxes.”

The next step in the investigation is to remove several of the valves from the spacecraft for in-depth analysis. The valves will be sent to NASA’s Marshall Space Flight Center for CT scans and additional tests, said Michelle Parker, vice president and chief engineer of space and launch engineering at Boeing.

One of the biggest issues is why the corrosion showed up on this spacecraft when it was not seen in the first uncrewed test flight or other ground tests of the spacecraft. “We’ve been looking very closely at that,” she said. “These are the same valves, same part numbers, that we’ve had in our service module hotfire, in our pad abort test in New Mexico, and OFT-1. There haven’t been any changes to those valves.”

The differences between OFT-1 and OFT-2 that the company is looking at include how long the NTO propellant was in the spacecraft’s tanks before launch as well as humidity that may have contributed the moisture that interacted with the NTO.

One factor that company has ruled out is the fact that the spacecraft for OFT-2 was first used for a series of environmental tests called Environmental Qualification Testing (EQT). “We’ve done a number of things to exonerate EQT,” Parker said. For example, some valves were replaced after those tests. “Even those valves that were the newer, non-EQT valves experienced this issue.”

The seepage of NTO through the valve is not unexpected. “This is something of a known phenomenon with the NTO that permeates across the Teflon seals,” Vollmer said. “We did see some of this on the shuttle program, and I think NASA has experienced this on some other programs. It’s really the combination of the NTO and the moisture.”

He added that the investigation is looking at if there is any incompatibility involving the materials in the valves that had not been identified in earlier analyses, “or if it’s just the excess moisture that we experienced.”

Boeing is still weighing options ranging from repairs to the service module currently installed to replacing the service module entirely with the one being built for the Crew Flight Test mission. Vollmer said repairing the servicing module provides the quickest path to a new launch attempt. “Our objective is to get back to flight safely as soon as possible.”

Whether the service module is repaired or replaced, he said the next launch attempt won’t be until as late as the middle of 2022. “There are some potential ways to accelerate that,” he said, particularly if the investigation doesn’t turn up any more surprises. “There’s a chance we could fly before mid-2022, but that’s yet to be determined.”

The valve problem is the only work taking place on the Starliner spacecraft right now. “We have not even opened the door on it yet. The vehicle is still fully assembled,” Vollmer said. “We’re trying to keep everything just as intact as it was. We’re not working any other issues.”

He credited the Starliner team for pressing ahead despite this latest setback that has delayed the OFT-2 mission for up to a year. “The morale has actually been surprisingly positive given that we’ve had a couple of disappointing events here,” he said. “The team has maintained a positive attitude.”

The Story Of AsapSCIENCE
What Causes Near-Death Experiences?
Why don’t we just breathe nitrogen? #shorts #science #SciShow
Placebos Work Even if You Know They’re Placebos!
The Chiliagon