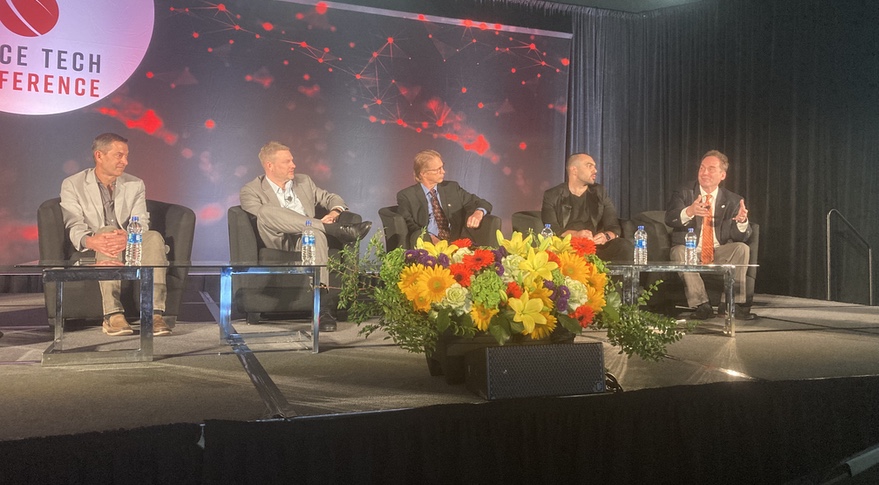 LONG BEACH, Calif. — Supply chain disruptions continue to pose a challenge for the space industry, but some see those disruptions as an opportunity for new approaches and innovation.

“We want to buy products and services at scale,” said Brig. Gen. Steve “Bucky” Butow, director of the space portfolio at the Defense Innovation Unit, citing efforts like satellite constellations for the Space Development Agency (SDA) for missile tracking and communications. “You can’t do that without healthy supply chains.”

Chris Winslett, Lockheed Martin program director for its work on the SDA Transport Layer, said that many smallsat manufacturers had, in recent years, shifted away from space-grade components because of their long lead times in favor of more widely available commercial and automotive-grade alternatives. “But with the issues of the pandemic, we actually saw a lot of commercial and automotive parts have longer lead times than space parts,” he said. “It’s been an interesting few years.”

Ron Faith, president and chief operating officer of RBC Signals, which operates a network of ground stations, said his company has seen a “significant impact” in lead times for components such as antennas, radios and other electronics. “They’ve stretched out from what used to be weeks to now many, many months,” he said.

Supply chain issues have also affected logistics. Faith said the company traditionally transported six-meter antennas, manufactured in the United States, to ground stations around the world through traditional shipping, but now transports them by air freight. “It does increase costs, but quite frankly the time compression is way more important right now given the other challenges that are in the supply chain.”

Those problems can slow the growth of companies. “We see companies that, during a healthy supply chain and healthy markets, would be thriving,” said Jordan Noone, co-founder and general partner at Embedded Ventures who previously cofounded Relativity Space. Today, “many of those companies have major struggles.”

Those struggles, he said, also present an opportunity to shore up the supply chain. He cited technologies like additive manufacturing and digital engineering to speed up the design and production of components. “You can modify the factory at the speed of software,” he said. “That brings that flywheel of software to the aerospace manufacturing world.”

The current supply chain disruptions, some panelists said, are a sign that some technologies, like electronics, whose production shifted to outside the United States in recent decades to reduce costs should be “onshored,” or brought back to the United States. Doing so could reduce supply chain reductions but increase costs.

“Does onshoring have to be more expensive?” countered Jeffrey Smith, element architect for deep space logistics for NASA’s Gateway program, arguing innovative technologies can reduce costs. “We have to find a way to do it, especially for space exploration.”

“It’s really imperative that we evolve and pull our acquisition heads out of the 1960s,” said Butow. “Look at how the industry is postured today, how to be more innovative, how to rapidly adopt and incentivize new technologies and new methodologies, and build and grow a healthy supply chain.”