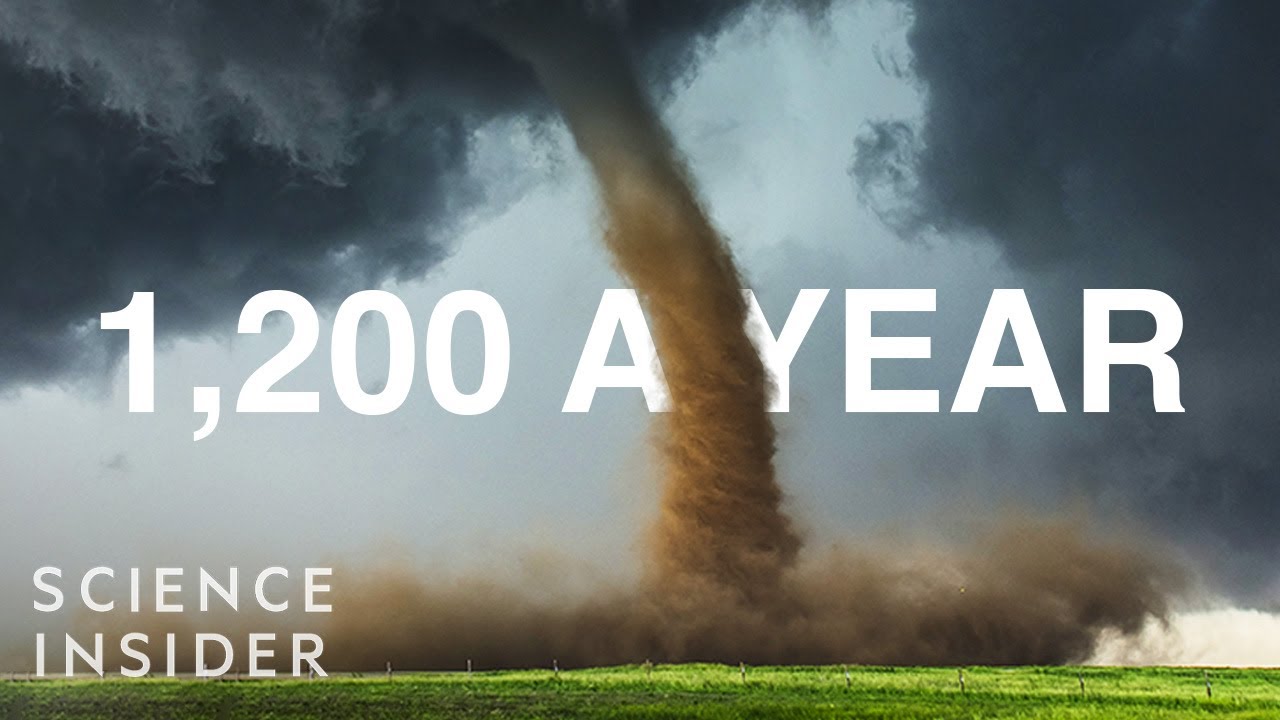 Share on Facebook
Share on Twitter
Share on Pinterest
Share on LinkedIn
Each year, over 1,200 tornadoes strike American soil. That’s more than anywhere else in the world. The reason the US has more tornadoes than anywhere else in the world has to do with the Gulf of Mexico and the Rocky Mountains. Together, these two landmarks create the perfect conditions for making twisters smack in the middle of America.

Each year, America gets around four times as many twisters as the rest of the world combined. It’s true. Taken altogether, countries outside the U.S. see around 200-300 twisters annually. Compared to more than 1,200 that strike American soil. So, what makes the US so special?

To make a tornado, you need just the right mix of ingredients: Warm, humid air near the ground. Cold air higher up in the atmosphere. And wind that overlaps while moving at different speeds or directions. Believe it or not, few places on Earth check all of these boxes. And none compares to the Great Plains of the United States — AKA, tornado alley.

Largely thanks to this: The Gulf of Mexico. Markowski: So the Gulf of Mexico is actually the warmest body of water on earth at its latitude. And when it comes to making tornadoes, the warmer the air, the better. As hot air rises off the Gulf, it crawls north across the Plains. Where it meets air blowing west out of the American Rockies.

When the two winds come together, they can create a vortex of wind that spins horizontally. Now, here’s where that warm air is key. As it rises — as warm air likes to do — it tilts the tube vertical to form a rotating storm called a supercell. And up to 20% of supercells spawn tornados.

Now, you can find these conditions elsewhere in the world. Markowski: Anywhere where you can find warm water that’s equatorward of some area that also finds itself downwind of a major mountain chain, tornadoes tend to be an elevated risk. Take Bangladesh, for example.

There, warm, humid air spreads from the Bay of Bengal and travels north. Where it overlaps with winds blowing southeast out of the Himalayan Mountains. This produces an average of around six tornadoes each year.

Including the world’s deadliest. Which killed 1,300 people and injured 12,000 more in 1989. But six tornadoes a year doesn’t compare to the 12,000 or so we see in the US. And tornadoes don’t just strike the US during tornado season from March through June. In January, for example, We get about 36 tornadoes!

That’s because you can find those perfect tornado conditions year-round. And over a region several times the size of Bangladesh. That said, tornadoes in the US may not be as common as you think. Markowski: “Most people greatly overestimate how often tornadoes occur in Tornado Alley.”

“I mean if you watch the movie Twister, it’s easy to think that every day at 4 o’clock they sound the alarm and you just go underground, but really most people that live in Oklahoma have never seen a tornado before.”

That’s because even in Oklahoma, the tornado capital of the world, tornadoes only strike the same spot once every 1,200-1,500 years, on average. But if you are unlucky enough to spot one, be sure to keep your distance. Tornado winds can reach a whopping 400 kilometers per hour!

Plenty fast enough to sweep you, and everything else off the ground.

Why America Has More Tornadoes Than Anywhere Else In The World

The Hardest We’ve Ever Pushed Matter
Artemis I Live Feed from Orion Spacecraft (Official NASA Broadcast)
BEST IMAGES OF THE WEEK: IMG! episode 6
How Many Calories are on a Smudgy Screen?
Ancient Genetics that Occur Today: Atavisms Revealed